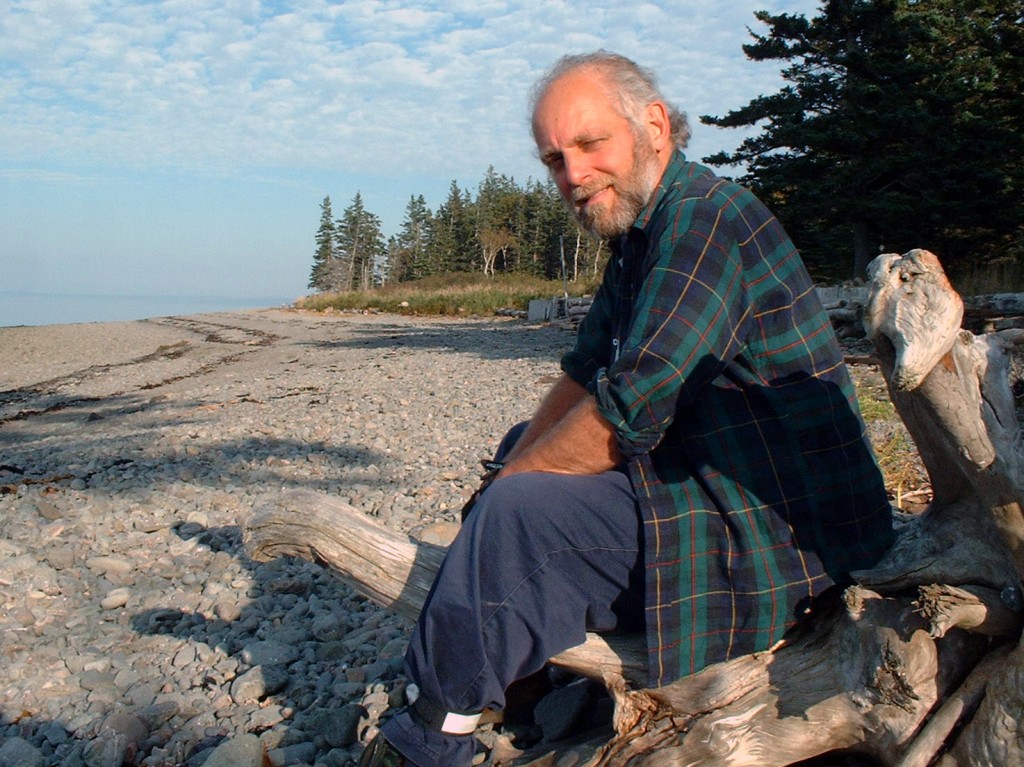 One of Canada’s most daring and courageous political figures, Tooker was a friend, co-conspirator and guiding light to so many of us.

A selfless trailblazer, Tooker’s absence will be felt in the environmental, labour, social justice, human rights, arts, and music communities in Canada and around the world.

We invite you to join in reflection, mourning and celebration of such an exemplary writer, activist, politician, videographer, public speaker and advocate for a better world.

Bio: Tooker Gomberg was born August 12, 1955 in Montreal, Quebec into a Jewish family of high achievers. His first foray into politics was at the early age of 7 when he was elected Mayor of his local park for a day. He claims the experience scared the pants off of him, but clearly it prepared him for a lifetime of political action.

After receiving an undergraduate Arts degree (with a focus on environmental studies) in 1980 from Hampshire College, Massachusetts, Tooker returned to Montreal where he founded one of Canada’s first curbside recycling programs, collecting recyclables and educating people about ecological alternatives to waste. He also gotactive with the anti-nuclear and bicycle advocacy movements, and had his own environmental radio show, the first of many.

Alberta Energy (Government of Alberta) caught wind of his dynamism and hired him teach students across the province about energy conservation. For four years he presented and developed classroom materials, teachers guides, and student programming. 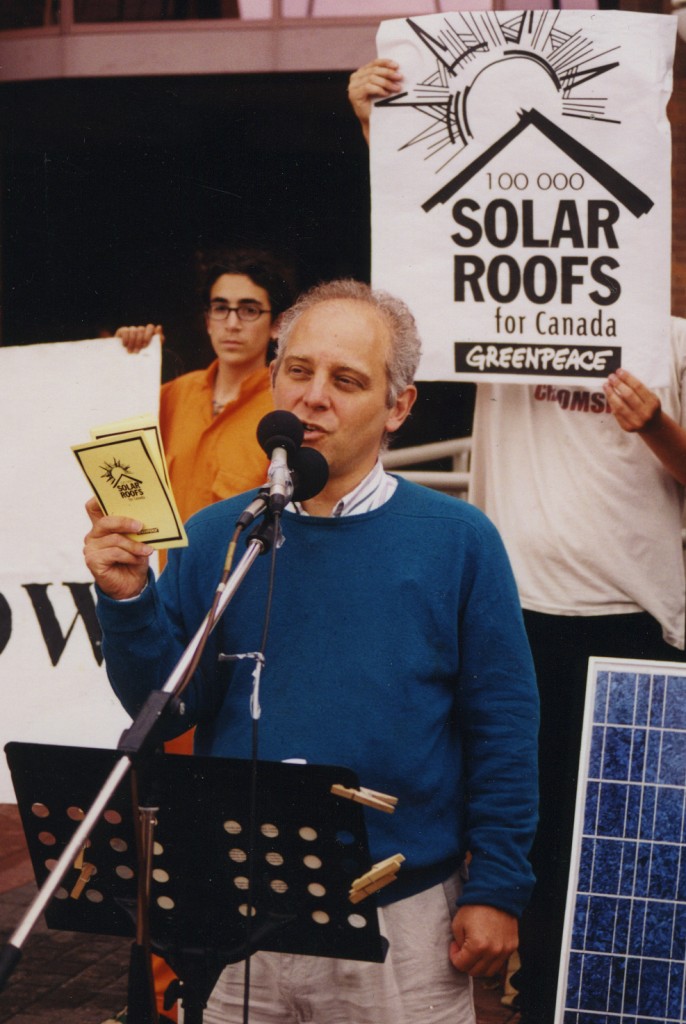 With his vibrant communication skills, Tooker soon took a lead role within the environmental movement in Edmonton, capturing imaginations with street theatre and independent media. He was an orator, and a prolific writer, videographer and photographer. He knew how to work the media. His issues were broad in scope, encompassing clean transportation (his beloved bicycles), composting, conserving the boreal forest, peace, air pollution, and energy conservation.As Executive Director of the Edmonton Bicycle Commuters, and then co-founder the grassroots urban ecological group EcoCity Society, he broke new ground in the urban sustainability movement in Canada.

Frustrated with the lack of political will to implement environmental initiatives, Tooker ran for local office in 1989, and then again in 1992 when he was elected to Edmonton City Council. In this capacity he worked hard day and night, and blossomed into a proficient and knowledgeable local leader, winning support for many Council decisions including: the adoption of water conservation (rather than a $300 million expansion of a water treatment facility); the establishment of a water conservation advisory board, a public transit advisory board, an environmental advisory board, and an alternatives-to-pesticides task group; the establishment of an automated transit information system; the research of and investment in solar energy by the local power utility; support for a city-wide backyard compost bin sale; and a pilot project of bicycle racks on city buses.

Tooker was a strong progressive voice on Council, fighting cutbacks of social and arts programs, privatization of the municipal water and phone utilities, corporatization of the business sector, contracting out, and more. In short, he was a dynamo, a thorn in the side of the dominant corporate culture, and the corporate media thrashed him.After losing his bid for re-election in 1995, Tooker continued his grassroots ecological, peace and justice research and advocacy work. He and his partner Angela Bischoff launched the Greenspiration Odyssey project, documenting inspiring ecological initiatives at home and abroad with video and written word. They cycled through Europe and East Asia where they attended the Kyoto Climate discussions in 1998 and later produced a half hour documentary entitled, “Kyoto – Winds of Change”.

Recognizing the need for political reform, and the golden opportunity for public education that elections offer, Tooker ran for Member of Parliament in his home turf of Montreal, and then for Mayor in Edmonton, all in a bid to raise awareness of progressive, green and just ideals. 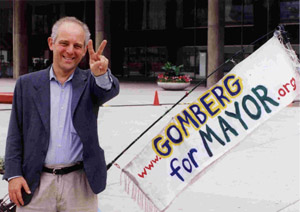 In 1999 he was brought to Toronto by Greenpeace to work as National Climate Change Campaigner where he soon gained notoriety. After playing a lead role in a fight to oppose a garbage deal, Tooker was now at the helm of the urban activist movement in Toronto. In 2000, with the support of hundreds of volunteers, Tooker ran for Mayor of Toronto on an environmental and justice platform highlighting the issues of homelessness, smog and garbage. Although marginalized by the mainstream media, he nonetheless received 51,063 votes, coming second only to the incumbent. These low-budget, people-powered campaigns were wildly successful from an activist perspective, but the energy output required to lead them was enormous.

After the Toronto election, and a whirlwind trip to The Hague where he burned his passport to protest Canada’s stonewalling of the Kyoto agreement, he was later arrested and deported for protesting on an American military base, which was illegally storing nuclear weapons.

Meanwhile, the anti-globalization movement was heating up, and a new generation was fomenting the largest protest movements ever seen on the planet. Tooker was sympathetic with this cause. The world wide web and affordable video technologies were opening up new opportunities for activist media. Tooker took full advantage, gathering video footage of activist events small and large, including the World Petroleum Congress protests (Calgary, 2000) where he was arrested, smiling as he was escorted off to jail by cops on bikes, and later the Free Trade Area of the Americas (Quebec City, 2001), where he was tear-gassed and again arrested.

Shortly after, Tooker suffered his first bout of depression, which took him out of action for nine months. It was debilitating and demoralizing for him. After coming out of it he jumped right back into activism and during the winter of 2002 he began the “Kyoto or Bust” tour, which soon turned into a frustrated attempt to confront Alberta Premier Ralph Klein about the Kyoto Protocol and global climate change. Tooker eventually locked himself into a vault in Klein’s office and faxed out hand-written press releases on Ralph’s own letterhead. This resulted in a brutal capture, arrest and short detainment. 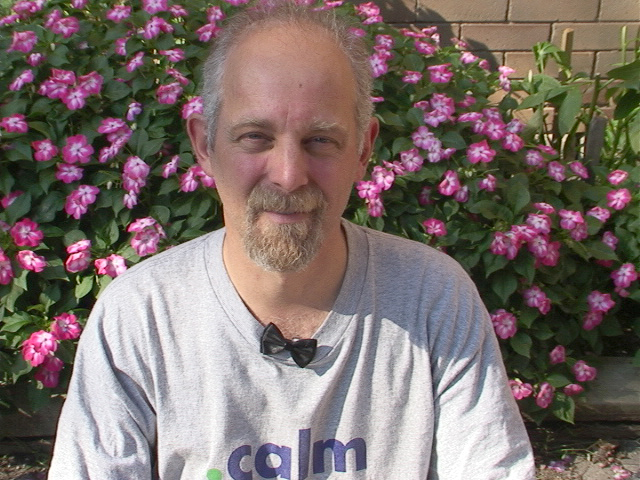 They moved to Halifax, where Angela had a job as a green transportation advocate. And then, after three decades of activism in the trenches, Tooker’s body shut down. It protested. His mind and body frazzled, he turned to a pharmaceutical anti-depressant for help; it agitated him. Rather than acknowledge the adverse reaction and reduce the dosage, his prescribing doctor doubled the dosage again, and then again. Tooker began to have suicidal ideation, yet another well-known adverse reaction to anti-depressant drugs. Just five weeks into his drug regimen, Tooker acted on his agitated anguish. His bicycle, helmet, and suicide note were found on the MacDonald bridge in the Halifax Harbour. His body was never recovered.

Activists and public across the country mourned Tooker’s death with 11 memorials. His tragic death left us all stunned and reflective. His humor, joui d’vivre, leadership and courage left an irreplaceable hole in the lives of so many, and in the activist movements in which he was so involved.

How could a man, so committed to community and the health of our planet, end his life? Many believe it was pharma-drug induced.

There are thousands of activists around the world in all areas of ecology, humanitarianism, peace and social justice who are still touched and inspired by the methods, passions and intellect of one Tooker Gomberg.

The last words go to Tooker, as a gift to those still working in the trenches and a prophylaxis against depression: ”Take care of ourselves and each other, spend time with loved ones, take breaks when necessary, and enjoy each moment on this lovely green and blue planet.”

Following Tooker’s tragic passing due to pharma-induced suicide, Angela Bischoff, his partner of 17 years, carried their work forward solo. She immersed herself in issues of mental health, sustainable activism, big-pharma, the dangers of anti-depressants, and anti-nuclear organizing. Her work, as well as Tooker’s, can be found on this website. 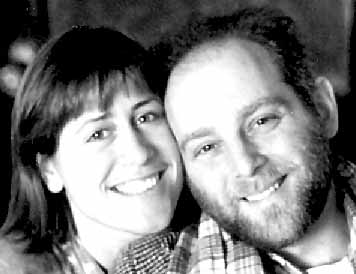